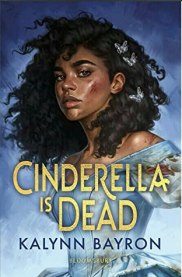 “It’s 200 years since Cinderella found her prince, but the fairytale is over.
Sophia knows the story though, off by heart. Because every girl has to recite it daily, from when she’s tiny until the night she’s sent to the royal ball for choosing. And every girl knows that she has only one chance. For the lives of those not chosen by a man at the ball… are forfeit.
But Sophia doesn’t want to be chosen – she’s in love with her best friend, Erin, and hates the idea of being traded like cattle. And when Sophia’s night at the ball goes horribly wrong, she must run for her life. Alone and terrified, she finds herself hiding in Cinderella’s tomb. And there she meets someone who will show her that she has the power to remake her world…” (Amazon)

Thank you to NetGalley and the publisher for my e-copy of this book.

Review of Cinderella Is Dead by Kalynn Bayron

I’ve read the ARC of Cinderella Is Dead a while ago, but as the book has just been released, I thought it would be a good idea to talk about this book here as well – it has been a fun read and I loved the diversity in it!

I’m a huge fan of fairytales retellings. Like many others, I have been raised on the traditional fairytales, and while I have enjoyed them as a child, they had so many issues: starting from being far to perfect (with their happily ever after, and never talking about anything that happens after) and ending the lack of representation of certain groups and sexualities, which has been particularly visible in older Disney version of fairytales. The trend in recent years with the retelling of the classic fairytales is often to either include more varied cast or retell the story more darkly. In many ways, Kalynn Bayron’s debut, Cinderella Is Dead, is both. The premise of this book is great: gay Cinderella overthrowing the patriarchy. What else can you want?

Cinderella Is Dead is a good read for the weekend, and I have enjoyed this book a lot. Narrated in the first person from the point of Sophia, a sixteen-year-old girl that has to attend the royal ball for the ceremony of choosing in the kingdom, where women have only freedoms and rights that the husbands allow them for. The only problem? She’s too strong-headed to allow someone to control her that way, not too mention that she has feelings for her friend, Erin.

As the main character, Sophia has been an interesting and strong protagonist, although I found her sometimes too quick to jump into things without actually thinking through the current situation. But the book, generally, had a good cast of the characters. I have enjoyed the supporting characters a lot in Cinderella Is Dead: from very scared Erin feeling like she doesn’t have any other choice, charming Luke and of course, another strong female lead, Constance. As retellings of Cinderella go, I particularly liked the representation of varied characters in Cinderella Is Dead.

It has been a good and accessible fantasy, especially for those who know the classical version of Cinderella and enjoy new spins on a well-known story. While in parts a little bit predictable, I found myself reading Kalynn Bayron’s book in less than a day, which says something! Some parts of the book felt a little rushed, and not as developed as the others, but overall I found Kallyn Bayron’s book very enjoyable.

Who is the book for: I would recommend the book to anyone who loves fairytales retellings, especially featuring a diverse and strong cast of characters. You can get your copy here.

2 thoughts on “Book Review: ‘Cinderella Is Dead’ by Kalynn Bayron”